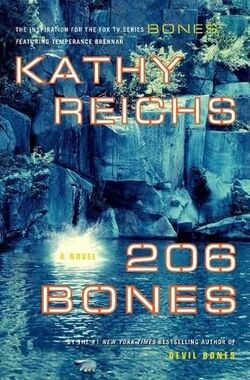 206 Bones is the twelfth novel written by Kathy Reichs, starring the novel's version of the fictional forensic anthropologist Temperance Brennan, though the character in the television series Bones is based more on Reichs herself than her novel's protagonist.

The book opens with Brennan imprisoned in an enclosed space, unable to remember where she is and how she got there.[2] The plot is interspersed with Brennan's account of how she escapes, culminating in the final dénouement.

The rest of the story is told in flashback. When Brennan has to recover the remains of a murdered old lady from a shallow grave in the midst of a freezing Quebec winter, she thinks she has the full set of 206 bones, but the crucial finger bones that could confirm the identity of the victim are not present when she comes to examine the skeleton in her lab.

Brennan discovers that an accusation of incompetence has been made against her: an anonymous phone call to the father of a murder victim accuses her of having missed a bullet-hole in the bones of an ageing Chicago heiress found in the Quebec countryside some months previously. Brennan and her on-off lover Detective Andrew Ryan set out to Chicago to clear her name, where, much to Brennan’s annoyance, Ryan bonds with her estranged husband’s Latvian family when his flight back to Montreal is delayed by the weather.

Morale in the forensics team in Montreal is poor, with the department head on extended sick leave, and a disruptive new recruit to the team. Two more old women are dead or missing, and Ryan suspects they may be dealing with a serial killer. In the process of solving the crime, Brennan also has to deal with an aggressive cat-hating neighbour and a cold case in Chicago involving a family link.

Retrieved from "https://bones.fandom.com/wiki/206_Bones_(Novel)?oldid=28660"
Community content is available under CC-BY-SA unless otherwise noted.