The Angelator is a holographic projector invented by Angela Montenegro, a forensic artist with the Jeffersonian Institute. It is also the lab's 3D graphics and computer simulation system. 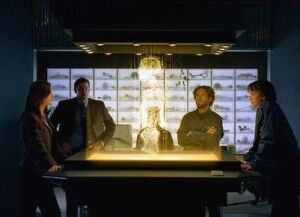 It belongs to Volumetric displays used for 3D projection of various objects. It is regularly used to show the team possible scenarios such as how a victim died, i.e., a car accident or being hit with a weapon. It also shows the physical appearance of a victim prior to their death and certain conditions which left the body incapable of being identified at all.

Presumably due to budget cuts or the limit of the screen, it was later replaced by the Angelatron, which uses flat, transparent displays.

Retrieved from "https://bones.fandom.com/wiki/Angelator?oldid=28614"
Community content is available under CC-BY-SA unless otherwise noted.