Edit
watch 01:33
Who is Christine Booth?
Do you like this video?
Play Sound

The Prisoner in the Pipe

The End in the End
Christine Angela Booth is the first child of Seeley Booth and Temperance Brennan. She has a younger brother Hank and through her father, she also has an older half-brother, Parker.

Temperance Brennan goes into labor at the end of a prison riot in the episode "The Prisoner in the Pipe", but the hospital is half an hour away, and Seeley must find somewhere to safely deliver the baby. They arrive at an inn which is hosting an expensive wine event. After much pleading, the unwilling owner finally allows them to use the back building, which turns out to be a small stable. Booth is forced to deliver the baby on his own, and she comes out amidst tearful laughter from her mother. Both Booth and Brennan admire the baby, who they later name Christine (after Brennan's late mother) at their house-warming party. Brennan reveals that the baby's middle name is Angela, after her closest friend and Christine's godmother, Angela Montenegro.

In the season 7 finale The Past in the Present, when Christine was just a few months old, she and her mother Temperance Brennan became fugitives after Christopher Pelant repeatedly modified evidence to frame Brennan for the murder of Ethan Sawyer. Right after she was baptized as a Roman Catholic, she was strapped into a car brought by Max Keenan and was driven off with Brennan. During that time, they were either homeless (at one point sleeping under a bridge) or possibly hid out in buildings provided by her grandfather. This continued for three months until Brennan discovered Pelant's first victim, Carole Morrissey and the investigation and Angela helped clear her name in the season 8 opener, The Future in the Past. Christine and Brennan were also reunited with Booth at this time. In the beginning of season 8, it's the first time Booth has seen Christine in months.

In season 8 we see Christine and her parents more as they grow as a family. Brennan and Booth love and adore the little girl and would do anything for her. During this time Lance Sweets comes to live with them, becoming a regular in Christine's life when he babysits her in a few episodes. In season 9, Christine was present at the wedding of her parents but due to issues with the twin actresses who play Christine, she wasn't seen in the episode. When her parents go away on their honeymoon, Christine is babysat by her godparents and family friends, Angela and Hodgins. It's show in this episode that their son, Michael Vincent, is one of Christine's best friends and that she loves to play with him. Also in season 9 it's Christine's birthday in the episode The Carrot in the Kudzu Booth and Brennan plan her birthday. Booth decides to hire a 'one man band' act, only to end up having to perform for his little girl himself because he couldn't make it. In the end, Brennan, Booth, and Christine are all seen playing tag in the park as their friends and family watch.

In season 10, Christine is seen again. Brennan mentions in episode 11 that she is three years old now, and can even complete a 100 piece puzzle within an hour. She has grown up a lot and there is even discussion about kindergarten. In the Bones episode, Lance to the Heart, Christine is seen looking for her Uncle Sweets, saying that her "Uncle Sweets and Aunt Daisy" were going to take her somewhere. When Sweets died, it is shown that Sweets cared a lot for Christine and vice versa.

In Season 11, Christine is portrayed as a loving and caring sibling to her younger brother, Hank. Like Parker did for her, Christine makes Hank a family-themed mobile, with drawings rather than photographs as the included images. Like her father, Christine is shown dealing with her uncle Jared's death. Christine's method of dealing with this sometimes causes Booth stress, as it includes taking the shipping box holding Jared's cremated remains and hiding it in Hank's room.

Brennan and Booth with newborn Christine 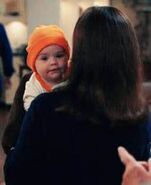 On her parents wedding 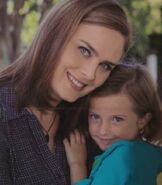