The Foot in the Foreclosure

"If I was a better man, maybe I could have figured something else out. But when I saw my son hitting Seeley... beating that little kid... that was it! I said, "Get out! You don't deserve to be a father! Get out!!" He never came back. So I... I was left with the two boys."
―Hank

Hank raised both Booth brothers after he caught his son beating Seeley. In "The Foot in the Foreclosure", Hank confides this secret to Seeley's work partner, Temperance Brennan, telling her that she should tell Seeley this and to hold him when she does. In the same episode, Hank stays at Seeley's apartment after getting into trouble with the nursing staff at the home he was staying at due to a heart condition. During his stay, he bonds with Brennan and Lance Sweets, however he realizes he needs to go back after he nearly burns down Seeley's apartment while making dinner for him.

In The Male in the Mail, Hank returns and tells Booth of his father's liver failure and subsequent death. Hank tries to get Booth to realize that although his father was an abusive alcoholic, he was his father nonetheless. He tells Booth to love Brennan and their unborn daughter and gives him a box from his son, which Booth at first refuses to open, but which is later revealed to contain reminders of the good times he had spent with his father.

In The Woman in White, he appears for Booth's wedding to Brennan. Hank is happy for his grandson and is happy to see him get married to Brennan.

In The New Tricks in the Old Dogs, Booth mentioned that Hank served with the 720 MP Battalion in Vietnam in the 50's when they were first interrogating Red Hudmore.

Hank with his grandson 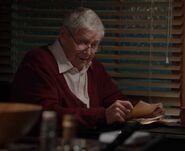 Hank on Booth and Brennan wedding
Community content is available under CC-BY-SA unless otherwise noted.
Advertisement