Edit
watch 01:36
We're Getting Mutants in the MCU - The Loop
Do you like this video?
Play Sound

The Medico-Legal Lab is Jeffersonian Institute's Forensic Division's laboratory and main base of operations on Bones.

It was former Jeffersonian Institute's Anthropology Unit Lab, now Forensic Division, a new division formed during the summer of 2006.

Lab is bombed by Mark Kovac in "The Day in the Life", resulting in severe damage. Despite this, the building remained structurally intact enough to be used in "The End in the End" to analyze the available forensic evidence, but after Kovac's death, the Jeffersonian is shut down for a few weeks to undergo repairs.

Where Brennan and her team do their work by examining the bodies of the deceased or murdered victims that have been found. The area where the bones or corpses of the deceased are stationed is guarded by an invisible laser to keep the remains and possible evidence safe from contamination or tampering.

In order for them to access the area, each employee must swipe their ID card into the machine at the entrance which in turn grants them entry. Failure to do so will result in a loud alarm being triggered that will only stop once another ID card has been inserted into the machine. Various guards are regularly seen stationed in or outside the area. All the employees at the Jeffersonian possess ID cards, with Booth later receiving his own ID card courtesy of Brennan although it is rarely ever seen.

Whenever she's not in the field or working on bodies, Brennan spends most of her time in her own office, filing reports, doing paperwork and also writing up her next possible novel.

Where Angela does her own work and also uses her own specially designed computer system (known as the Angelator and later the Angelatron) to give the team a glimpse or an insight into what the victims looked like before decay left their bodies unrecognizable as well as possibilities into how they died.

Where Cam performs her own autopsies on the victim's remains before they are taken away to have their flesh removed so that Brennan and her team can look at the bones to identify the victim, locate forensic evidence, or find any possible causes of death. She also has her office here.

In the first three seasons Hodgins often worked at a lone desk in the Forensic Area but in recent seasons, he moved into Zack's old office, unwillingly. This is also the place Zack and Hodgins often did their experiments. In addition, Hodgins regularly keeps some of his bugs here.

Where the skeletal remains of the victims are usually located. Brennan and her team usually go there to see if they can find anything else in regards to the bones. In the episode The Shot in the Dark Brennan got shot in the room while she examined some bones.

A long hallway containing numerous boxes of bones belonging to people who have not been identified. Also referred to as "Limbo", though both Dr. Goodman and Dr. Brennan object to the term. Later in the series, everyone started to call it Limbo.

Located on the mezzanine level of the Jeffersonian Institute's Medico-Legal Lab, overlooking the forensic platform, it is the area where Brennan and rest of team usually go for meetings or if they just want to hang out after a tough case.

Brennan and Booth at her office

Angela and Brennan meet with her grad students. 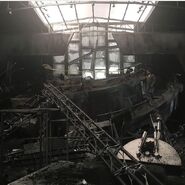