Edit
watch 01:42
Who is Parker Booth?
Do you like this video?
Play Sound

The Man in the Fallout Shelter

The Strike in the Chord
Parker Booth is the son of Seeley Booth and Rebecca Stinson. Through his father, Parker has a younger half-sister Christine and younger half-brother Hank. Parker is currently under the custody of his mother.

It was revealed in the Season 4 episode The Hero in the Hold that Parker was named after one of Booth's army buddies who was killed in action in Iraq. Stranded on a soon-to-be-sunk ship by the Gravedigger, the ghost of Corporal Edward 'Teddy' Parker appeared for Booth in order to help him. Booth was Teddy's sergeant back when he was a sniper, and Teddy had died while under Booth's watch. Booth reveals to Teddy's ghost that he is his son Parker's namesake.

Parker mentions that his favorite show is Wizards of Waverly Place. And judging by his room he takes after his father's love of sports and airplanes, and he enjoys comics, skateboarding, video games, RC cars, and more. According to Sweets in Season 8, Parker's bed has Wolverine sheets.

Parker gets along with Booth very well. He loves Booth a lot, even more so than his own mother. In the Season 3 episode The Santa in the Slush he is shown to call his mother's boyfriend Captain Fantastic along with Booth, and opts to spend Christmas with Booth rather than his mother. Parker does this by going on the street and telling a police officer that he is lost. He then tells the officer that his dad works at the FBI, after which the officer takes him to Booth. Also in this episode, Parker calls Brennan as 'Bones', just like his father.

In Season 5, Parker attempted to find Booth a girlfriend, even asking Dr. Brennan to be Booth's girlfriend. When Booth and Brennan ask why he is conducting his search, Parker tells them simply that he wants a pool, and that the father of one of his classmates married his girlfriend and moved to a house with a pool. Brennan remedies the situation by giving Parker a key to her apartment building, so he could use the pool whenever he wanted to.

At the end of Season 6, it is revealed by Brennan that she is pregnant with Booth's child, making Parker a big brother.

In Season 7, The Warrior in the Wuss, Parker comes back to Washington D.C from living in England for the past 4 months and is excited to meet his new sister, Christine. However, he seems quite withdrawn and starts stealing and lying to both Brennan and Booth. In Parker's closet, Brennan finds one of her lab coats and photos that he has taken and cut up. When confronted, Parker shows Brennan and Booth a mobile that he made for Christine, which has pictures and other items from his dad, Brennan and himself.

In season 9,The Woman in White, Parker comes back to Washington D.C for his father's wedding to Brennan. Parker is Booth's best man at the wedding.

In season 11, Bones invites Parker, for Thanksgiving dinner to surprise Booth. It's also the occasion for Parker to meet his new half-brother. Parker is attending a writing course at Oxford.

In The End in the End, Brennan recovers a drawing Parker made for her eleven years before from the wreckage of her office in the Jeffersonian. Brennan shows it to Booth in the show's final scene and notes that Parker had given it to her so long before because he liked her. 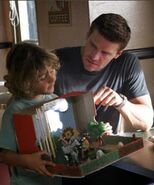