The End in the End

Edit
watch 02:16
Episode Recap: Bones: The End in the End
Do you like this video?
Play Sound

The End in the End

The End in the End is the series finale of Bones and the final episode of the twelfth season.

With Kovac still at large, the team searches for evidence to track him down. After Brennan experiences a setback, the rest of the team must figure out how to find Kovac without her, putting everything she has ever taught them to the test. When all signs point to Kovac having outside help, as well as a hideout, Booth and Brennan go searching for him.

Hodgins: Squints of the world unite!

Brennan: If the thing that made me me is gone, who am I?
Booth: “You’re the woman I love. You’re the woman who kissed me outside a pool hall when it was pouring rain. You took me to shoot Tommy guns on Valentine’s Day. That’s who you are. You’re the one who proposed to me with a stick of beef jerky in her hand even though you’re a vegetarian. You’re the Roxie to my Tony, and the Wanda to my Buck. Who else is gonna sing ‘Hot Blooded’ with me? And besides…we’re way better than Mulder and Scully.”
Brennan: “I don’t know what that means.”
Booth: "I don’t care if you know about the bones or we know how to solve crimes. All I know is that I want to spend the rest of my life with you. This is you. Temperance Brennan. You’re my partner. Don’t forget that." 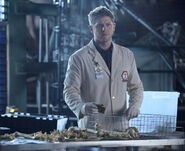 BONES To leave The Lab