The Radioactive Panthers in the Party

Edit
watch 01:55
Cobra Kai Season 4 - The Loop
Do you like this video?
Play Sound

The Radioactive Panthers in the Party

The Radioactive Panthers in the Party is the tenth episode of the twelfth season of Bones.

When the burning, bruised body of an aspiring writer/director crash-lands onto a passing car, the team investigates a series of odd locations and characters that are connected to his film. Meanwhile, Bones seeks guidance from Dr. Mayer on the meaning of passion in the work place and Booth allows Aubrey to take the reins on their current case.

Intern of the Week[] 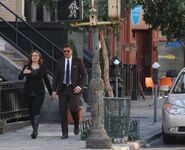