The Woman in White is the sixth episode of ninth season of Bones.

The Jeffersonian team investigates the murder of Nancy Handelman, whose body was discovered at the time of Brennan and Booth's wedding rehearsal. When the case becomes more serious than the team anticipated, Cam and Angela do everything in their power to keep the details of the investigation from Brennan in order to ensure that she will stay focused on her big day. Tensions run high when unfortunate events occur to stall the wedding temporarily, and Max comes to town with a suspicious duffle bag full of money.

Intern of the week[]

Booth: I worked really, really hard on my vows, but you know, now that we're here, look, um, hey. Do you remember the last time that we were here? Standing right around in this spot? It was right in the beginning before we really knew each other. I was trying to get away from you because you were irritating me and, uh, you chased me down, and you caught up to me and I said to you 'listen, I just have to get all my ducks in a row' and you said to me--
Brennan: I can be a duck.
Booth: Yeah. You know we had been chasing each other for a long time. Chasing each other through wars and serial killers and ghosts and snakes. And now chasing you has been the smartest thing that I have ever done in my life. And being chased by you has been my greatest joy. But now, we, uh, we don't have to chase each other anymore because we caught each other.

Brennan: When Hodgins and I were buried alive, we each wrote a message to someone we loved in case our bodies were ever found. Hodgins wrote to Angela. I wrote to you. 'Dear Agent Booth, you are a confusing man. You are irrational and impulsive, superstitious and exasperating. You believe in ghosts and angels and maybe even Santa Claus. And because of you, I've started to see the universe differently. How is it possible that simply looking into your fine face gives me so much joy? Why does it make me so happy that every time I try to sneak a peek at you you are already looking at me? Like you, it makes no sense. And like you, it feels right. If I ever get out of here, I will find a time and a place to tell you that you make my life messy and confusing and unfocused and irrational and wonderful.' This is that time. This is that place.

Booth: So what do you think happens now?
Brennan: Everything that happens next.

Max: I'm sure you know how happy I am for both of you and Booth, it's my fatherly duty to tell you that if you do anything to hurt my little girl, I'll kill you.
Booth: Thanks, Max, for all of this.

Sweets: You ready, Booth?
Booth: I've been ready for years.

Booth: Bones, I would wear elephant tusks on my head and have a squirrel monkey do the wedding ceremony if that's what you wanted.
Brennan: You really don't care?
Booth: No.
Brennan: Neither do I. As long as you're there. We've waited long enough.
Booth: We have.

Aldo: What you and Temperance have, it's the reason we draw breath. You screw this up, Booth, and it'll be worse than any Hell God can dream up for you.

Hodgins: Hey, if you build it, they will come.
Angela: I hated that movie.

Brennan: I don't need sleep to be beautiful.
Hodgins: No, but it does make you pleasant.

Booth (to Angela): Can you cry after eleven?

Hodgins: I'll put $25 on the wedding being cancelled by lunchtime tomorrow.
Sweets: Yeah, $50 says it’s cancelled before the sun goes down.
Cam: Worst friends ever.

Clark: I got your text about the wedding pool. I'll put fifty on it being called off by three.

Cam: Hodgins, what have you got for me?
Hodgins: Brennan's done with her mani-pedi.

Cam: $20 says it’s cancelled by one tomorrow. Oh God, I hate myself. 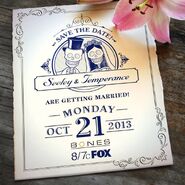 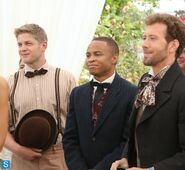